The Evolution of God-Images Part III: A Tribal God 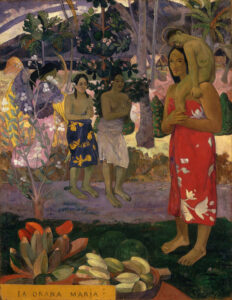 “[R]eligious statements without exception have to do with the reality of the psyche.” C.G.Jung Answer to Job, CW11, par.752.

My mother was emotionally repressed and mistrustful of her femininity, and my father died when I was at an impressionable age. What does my history have to do with my adult spiritual quest? Just this: My most compelling needs have been to get in touch with my emotional realities, empower my femininity, and connect with sacred energies that are fully alive and close to me in the present moment.

If the motivations behind one person’s quest differ from another’s it’s because of differing factors of personality and history. Everybody filters religious ideas through a lens of personal experience, and no two people have the exact same beliefs or God-image. But this is no cause for concern. The fact that spirituality is based as much on experiences as on input from religion in no way negates the truths of either element.

Here is one of he most important things I have learned about the spiritual quest:

If we want to know God we need to know ourselves well enough to see how and when we get in the way of receiving all of God.

In today’s world one of the biggest barriers to receiving all of God is our fear of being ostracized by important social groups. One of these is our family. Another is our community of worship. Because of this fear many of us deny our own feelings and realities for years. Some never acknowledge them.

When I seriously began to question God in my late thirties, I had this herd mentality and didn’t even know it. Beneath my fine ideals and carefully-wrought beliefs was a set of emotional and instinctual assumptions of which I was completely unaware. Listen to the unconscious messages my gut was sending:

The tribe (your family, mentors, teachers, government, religion, etc.) is all-important. You are not important. The tribe’s God-King is an all-powerful and all-knowing male. In comparison, you are powerless and ignorant. The better you are at adapting to the tribe’s beliefs and the tribe’s God, the better are your chances of survival. Period.

The grown-up me didn’t believe these things at a conscious level and I would have confidently contradicted anyone who suggested I did. But without my knowledge I was being influenced by my terribly insecure pre-adolescent “inner orphan” who believed them utterly. I had so little self-knowledge I was blind to her. But she was a very real complex of memories, emotions, ideas, and assumptions that covertly influenced my spirituality well into adulthood.

When I began a program of self-reflection I began to see that most of my religious practices were motivated by fear—fear of judgment from God and ostracism from my religious community. Sometimes God felt like a fierce and dangerous stranger whose retribution I feared, whom I had to obey and appease, who didn’t value me as much as he valued others (especially men), and whose notice I sometimes hoped to avoid in order to stay safe.

From the age of seventeen I had a gnawing spiritual hunger that I looked to religion to satisfy. From then on I thought my reason for attending church and volunteering for so many boards and commissions was to give God what he wanted from me. But now I see that my unconscious motivation was not an altruistic desire to serve God but to have the good opinion of God, my ministers, and my fellow parishioners. My orphan was afraid that if I didn’t go to church regularly, God might punish me, the preacher might be disappointed in me, and my religious community night think ill of me. I might even go to Hell!

I needed the approval of my “tribe” and its ideas about God. If my family and church thought I was good, I was; but if they thought I was bad, unworthy, lacking the necessary spirituality, or doomed to eternal damnation, it would mean I truly was bad, unworthy, lacking, and doomed. Again, I didn’t believe this in any conscious way, but I now realize this is what my hidden child believed.

Being an intelligent, well-intentioned, responsible adult does not automatically confer mature spirituality. As a college-educated, spiritually oriented woman I had a lot of information about my religion but I didn’t know myself or believe in the intrinsic value of my soul. With no models of psycho-spiritual maturity I had no understanding of how my personal psychology influenced my spirituality. I wanted to be spiritually mature and was doing everything I could to make that happen, except the one thing that would have worked: self-discovery.

“Here each of us must ask: Have I any religious experience and immediate relation to God, and hence that certainty which will keep me, as an individual, from dissolving in the crowd?” C.G. Jung, The Undiscovered Self. CW 10, par. 564. 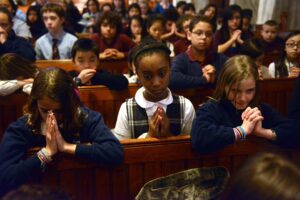 Who had the most influence on your spirituality from the time you were a child? Did they encourage you to question or conform to their ideas about God and religion? How did you respond? Why?

Read more about your spiritual journey in Healing the Sacred Divide. This copyrighted material is from pp. 35-38.