The Evolution of God-Images Part IV: A God Like Us 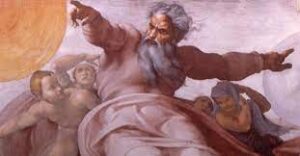 “Obviously we do not know how the ego arose in man. We have certain myths showing how ancient man thought about this problem, and we can observe the phenomenon in very young children today. Just as the individual child must undergo training and discipline, so too the primitive nature of man had to be housebroken and domesticated, restrained and adapted, if he was to advance in culture and in ability to control his environment.” M. Esther Harding, Psychic Energy, p. 197.

By around the age of three, most children’s egos are strong and consolidated enough to think of themselves as separate individuals. This is when memory begins. We do not leave the first phase of our lives behind at this point, but we do begin to adjust our responses to our instinctual needs according to the demands of our environments and the development of our ego awareness. Recognizing our psychological separateness from Mother and our capacity for independent action doesn’t always result in mature behavior, but it does make it possible for us to evolve into the more mature form of self-awareness I call Epoch II.

Our egos have several spurts of increased self-awareness during Epoch II.  Many of these awakening are associated with developmental stages such as adolescence, young adulthood, and mid-life. At these critical junctures we confront new life challenges which make us more aware of previously unknown needs and desires. The resulting inner conflicts help us see outdated reactions and assumptions, reflect on who we are and how we really want to live our lives, and make new choices. At such times, most people gain valuable self-knowledge that furthers their inner growth; but fear and habit can hold us back, and we can get stuck at any time along the way. If this happens, our consciousness and religious thinking stop expanding even though our bodies and social behaviors continue to age and change.

Hence, an Epoch II ego can be strong or weak, healthy or unhealthy, helpful or harmful, mature or immature, intelligent or ignorant, open or closed, caring or uncaring, static or growing. Some hunger for Spirit; some are not interested. Some fear the inner world, some can’t get enough to it. The possibilities are endless.

The Masculine orientation of the Epoch II Ego

A primary feature of Epoch II is the ego’s preference for masculine values. If Epoch I is Mother’s realm, Epoch II belongs to father. It begins as a time of conflict, when “The father emerges both as a model of the independence the child desires and as a rival for the intimacy the child desires.” (Michael Washburn, Transpersonal Psychology in Psychoanalytic Perspective, p. 69.) Whether or not a personal father or other adequate male is available, children will try to satisfy their growing need to adopt masculine values by transferring their allegiance to teachers, peer groups, teams, nations, religions or causes.

The new conflicts we experience in adolescence elicit an intense need to further develop our individuality. Although the genders can experience this growing-self-awareness differently, especially in patriarchal households, the gap is narrower than we might think. During this time every healthy ego flexes its wings, struts around the nest, and calls forth “masculine” values such as will power, independence, self-initiative, self-discipline, competition, achievement, and ambition to gain favor in Father’s world.

Dualism and the Epoch II Ego

With ego consciousness, everything becomes about us. Things no longer just exist; they exist for us! They are good or bad for me! All things which were once one, are now split in two. Dualism arises naturally as we separate from Mother’s realm and begin to differentiate ourselves. We sort things into pairs of clearly defined opposites of good or bad, and usually identify with the good and repress the bad.

The dark side of dualistic thinking is bias, prejudice, suspicion, hostility, fear, aggression and repression. Some people obsess over the “masculine” qualities so highly prized during this phase that they become inordinately repressive to “feminine” otherness. Unwilling to consider opposing points of view or budge from entrenched polarized positions, they can become so self-righteous and closed-minded that they gravitate, like the sky God onto which they project these qualities, toward, agitation, divisiveness, domination, and war. The most powerful and repressive of these Epoch II egos are the major culprits in the dangerous dramas playing out on the world stage today. In their psychological ignorance, many of them fervently believe they are God-centered; but in truth, they are firmly entrenched in Epoch II egocentricity.

The proof of the Epoch II ego’s extreme need to preserve, indeed, to glorify its self-image whatever the cost is willingness to kill and die for the God it creates in its own image. The Epoch II God is just like us. It is oriented toward masculinity, thinks dualistically, has the same beliefs about good and evil as we do, prefers our particular tribe, and represses otherness to the point that it is sometimes compelled to destroy whatever opposes our values and ideals. With an ego like this worshiping a God like that, is it any wonder most of us find it so incredibly difficult to open to the unknown otherness in our unconscious and the world?

What dualisms defined the God-image of your church and family? What did they teach you about the differences between the God-images of your religion and others? Has your God-image changed over time?  If so, how? What made it change?

Read more about your spiritual journey in Healing the Sacred Divide. This copyrighted material is from pp. 39-45.