The Evolution of God-Images Part II: A Child’s God 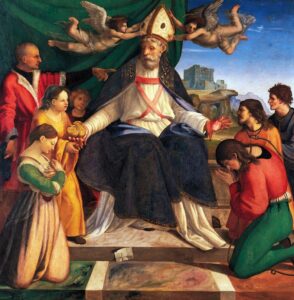 The religious attitude, it is quite different, and above all it is not conscious. You can profess whatever you like consciously while your unconscious attitude is totally different. ~C.G. Jung. Visions: Notes of the Seminar Given in 1930-1934, Vol. 1, p. 41.

Like all children, I got my ideas about God from people around me. My parents attended church regularly (Daddy went whenever he was home, which wasn’t often) and sang in the choir. My memories of my father are few because he died when I was eleven. But I idolized him. In my eyes he was perfect—my hero, a god. As a policeman, he believed in following the rules, so naturally I believed that following the rules was very important to God and the best way to stay safe in the dangerous world he had created.

Mama was an intelligent, no-nonsense nurse admired by everyone who knew her. The first woman in her family to have a college-educated profession, she absorbed many values associated with masculinity—especially Warrior qualities like dedication to her work, self-discipline, a Spartan lifestyle, and self-sufficiency. Introverted and emotionally reserved, she equated femininity with weakness, inferiority, and victimization.  She had unconsciously adopted the prevailing social and religious attitudes that favored masculinity and disowned many qualities associated with her feminine side. In doing so, she bequeathed to me the same God-image of male dominance and superiority that eroded her own hope of wholeness.

The summer before sixth grade we visited my father in another town where he was working. I was outside with several boys and girls diving, racing, and showing off in in the motel pool when my parents called me inside. Receiving personal attention from either parent was rare enough, but to be summoned into their joint presence was extremely unusual, like being summoned to an unexpected audience with the Queen and King! I knew the matter must be of utmost importance and listened intently.

I was a natural leader, with gifts and talents many children lacked, my father said. I should be careful, he warned, about not showing off, being bossy, or dominating situations. A little girl out there was having trouble keeping up with the rest of us. I should think about her feelings, try to include her and make her feel better about herself, try not to call attention to myself by outshining the others.

My eyes were instantly opened to an entirely new way of looking at myself and others. Overcome with self-consciousness, I realized for the first time that people were not only watching, but critiquing me, possibly even feeling bad about themselves because of me. I should think about their feelings and ignore my own. I should hide my strengths so as not to intimidate. I should be strong enough to make those kinds of sacrifices for others. I came out of that room a different child from the one who had so innocently pranced in.

After a moment’s deliberation I casually walked up to the little girl in the faded brown bathing suit and tentatively lied, “I like your bathing suit.”

She grinned widely as she said something like, “Really? This old thing?” Then bounced away to jump off the diving board while I walked to the nearest chair and sat quietly so as not to attract notice. What if in my ignorance I had spent the whole day out here enjoying myself while making these other children feel terrible about themselves?  My God! The mistakes I could have made. Suddenly, the world was filled with eyes, and all of them, especially God’s, were watching me. If I had to pick one moment in my life when self-consciousness took over and I left the innocent confidence of Epoch I behind, this would be it.

After that, God was a collection of abstract ideas. A male who had nothing to do with my body, feelings, needs, or the joy and wonder I experienced in nature. An aloof, distant, powerful, all seeing, overtly beneficent but secretly critical, gender-biased, judgmental, and untrustworthy King. A perfectionist who expected obedience, humility, hard work, high moral character, making nice, selfless service, and of course, regular church attendance. I was determined to give him these things to the best of my ability. I should expect nothing from him in return unless I did something wrong, in which case I would be notified and punished. He called the shots and that’s how it was. That was fine with me. After all, he was the King of heaven; he was God.

This is a Santa Clausy image of God. Based on a child’s normal fears, vulnerability, and desire to please, it is typical of someone in the early stages of Epoch II self-awareness. By puberty, most of us develop egos with enough confidence to challenge the rules of our parents, but many of us don’t get around to questioning our family’s God-image. I didn’t. This God-image prevailed throughout the first half of my life. At a conscious level my spirituality underwent many changes. But beneath the surface layer of intellectualization with which I came to identify, the same childish emotional reality—the same unconscious, needy attachment to the norms of my family and fear of God’s retribution for questioning their values—lived deep within me like an insecure orphan who’s afraid to leave the safety of her dark, locked room.

From whom did you get your early ideas about God? Have they changed? How? Why?

Read more about your spiritual journey in Healing the Sacred Divide. This copyrighted material is from pp. 27-33.