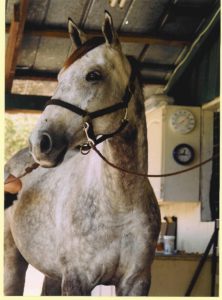 “No philosophers so thoroughly comprehend us as dogs and horses.” ~Herman Melville

Note:  Thank you for the wonderful response to my last post about what my granddaughter learned from her horse. I’d like to continue that theme with this post I wrote several years ago.

As one of the best teachers I’ve ever had, my horse Shadow ranks right up there with Jung and my dreams. Horses, like dreams, are nature: they do not lie. People can cover their true feelings with masks, but horses do not know how to make masks. As animals of prey that have survived by being intensely alert and wary, they are easily unsettled by subtle signs of incongruence in people’s behavior. The tiniest gesture — a tentativeness in our stride, a sideways glance, a sudden intake of breath — can trigger prehistoric horsey images of predatory wolves clad in sheep’s clothing and cause them to spook.

One of the most amazing and frustrating things about horses is that they naturally mirror our emotions. If we are afraid, they will be afraid. If, beneath a calm exterior, we are irritable or angry, intense, anxious, or excitable, they will behave in accordance with the deeper reality. Shadow was especially good at this. And since I’ve always been good at ignoring uncomfortable feelings, together we were a Jungian analyst’s dream!

“Courage is being scared to death but saddling up anyway.” ~John Wayne

For example, the first time Shadow and I took a dressage test, I was vaguely aware of feeling nervous; but because I didn’t like the way that felt, I ignored it. Thirty minutes before my test was to take place, Liz, my trainer, told me to exercise him in the round pen. This is a training technique where you ask the horse to walk, trot, and canter around you in wide circles. This warms him up, reminds him of cues, bonds him with his trainer, consumes excess energy, and gives the trainer an opportunity to monitor his mood and correct inappropriate behavior.

When Shadow started moving along the fence he couldn’t have looked more anxious; his movements were tentative and irregular and his eyes darted wildly from side to side as he looked over the fence to scan the horizon for danger. This was his first visit to this stable where the event was to be held, and he was nervous. When I asked him to canter he raced around in the thick sand so quickly and recklessly that I was afraid he would fall and hurt himself.

Worried, I yelled “Whoa” louder and louder, but this only got him more stirred up. I tried rushing to the side of the pen with outstretched arms to stop him, but that only made him turn around and gallop away in the opposite direction. Then suddenly the veil dropped away and I saw the full extent of my own anxiety in his behavior.

“When your horse follows you without being asked, when he rubs his head on yours, and when you look at him and feel a tingle down your spine…you know you are loved.” ~John Lyons 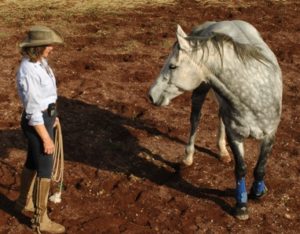 Immediately I stopped dead still in the center of the ring, closed my eyes, and began to breathe as slowly and deeply from my belly as I could. As I calmed myself, his response was immediate and dramatic. Within two turns around the ring his wild pace slowed to a canter. After a couple more turns he was trotting, a few more and he walked calmly toward me, stopped behind me, and touched his nose to my left shoulder. Whereas before my behavior had convinced him there was something to worry about, now he was equally convinced everything was fine.

This lesson affected me profoundly. Fifteen minutes with Shadow in that round pen brought home something I had not mastered after years of meditation: recognizing negative emotional states and rendering them harmless by returning to my quiet center. This skill is crucial to conflict resolution in everyday relationships. Can you imagine how different the world would be if everyone involved in international relations had a Shadow to show them their shadow?

What lessons has Our Lady of the Beasts taught you through your animal friends?

Jean Raffa’s The Bridge to Wholeness and Dream Theatres of the Soul are at Amazon. E-book versions are also at Kobo, Barnes And Noble and Smashwords. Her Wilbur Award-winning book, Healing the Sacred Divide can be found at Amazon and Larson Publications.com. Her new award-winning book, The Soul’s Twins, is available at Schiffer, Red Feather Mind, Body, Spirit and wherever books are sold. Subscribe to her newsletter at www.jeanbenedictraffa.com.

PrevPreviousThat Certain Something About a Horse
NextYaaaay! This Is the Big One!Next