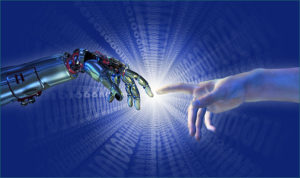 “Since psyche and matter are contained in one and the same world, and moreover are in continuous contact with one another and ultimately rest on irrepresentable, transcendental factors, it is not only possible but fairly probable even, that psyche and matter are two different aspects of the same thing.” C.G. Jung, On the Nature of the Psyche, CW Vol. 8, para. 418.

Have you ever experienced a coincidence so utterly improbable yet so completely right that it gave you goosebumps and made you feel as if you had been touched by some supernatural power—supernatural because nothing ordinary could arrange so many disparate notes into such perfect harmony—in a song written just for you? Jung had a word for a coincidence that meaningfully connects our interior lives with events in the outer world. He called it synchronicity.

Jung believed we are wired to seek a spiritual counterpart to the objective facts of physical science and integrate the two to become a whole, self-realized person. This happens by paying attention to our waking thoughts, emotions, and attitudes, and actively connecting them to our unconscious through imaginative dialogues with the contents of our dreams. Jung named this regular back and forth conversation between ego and Self individuation.

Regular self-reflective dialogues with the Self become a daily mediation that transforms us into separate individuals with a heightened realistic awareness of the differences between ourself and others. This is when we begin to experience synchronicities, ie. meaningful coincidences. These are not products of the scientific law of cause and effect, but of an imaginative, heartfelt search for personal meaning and wholeness.  When you’re in the flow, synchronicity lets you know.

If everything visible and invisible is linked together in the Supreme aspect of soul, then what could be more natural than for objects and events “outside”of ourselves to coincide exactly with our inner, subjective reality?This does not mean that we (our ego selves) caused these events by willing them, but only that through the Self or soul that indwells each one of us, the Supreme aspect of soul actively supports and cooperates with our spiritual growth.

“Synchronistic events are thus creative acts expressive of an absolute organizer or creative force, what Lao-tzu called “the mother of all things under heaven”, or what R.F.C. Hull translates as Meaning with a capital M to show that it is ultimate, undivided unity or soul which transcends space and time.” ~Physicist Vic Mansfield, Head and Heart

To the logical mind such ideas feel dangerously ignorant and superstitious, but to the analogical (metaphorical) mind they make perfect sense.  There is no reason or need to choose between one way of thinking or the other. We are meant to use both. Synchronicity is a spiritual aid for the individual, maturing seeker. Does it really matter if my synchronistic event is “true” according to your definition of truth?  Not a whit!  Not if it fills me with joy and vigor and empowers me to persevere in my journey toward the destiny I believe to be mine.

“I suddenly realized that … everything actually was all-meaningful, that every symbol and combination of symbols led not hither and yon, not to single examples, experiments, and proofs, but into the center, the mystery and innermost heart of the world, into primal knowledge. Every transition from major to minor in a sonata, every transformation of a myth or a religious cult, every classical or artistic formulation was, I realized in that flashing moment, if seen with a meditative mind, nothing but a direct route into the interior of the cosmic mystery, where in the alternation between inhaling and exhaling, between heaven and earth, between Yin and Yang, holiness is forever being created.” Hermann Hesse, “The Glass Beads Game”

Jung analyzed the Austrian physicist Wolfgang Pauli for many years. During that time he received an education in quantum physics and Pauli in the reality of the psyche. Together they discovered the connection between the quantum level of reality and synchronicities. In the book Synchronicity: An Acausal Connecting Principle, Jung grouped synchronicity into three categories of acausal phenomena, (1973, p. 110)

More recently, journalist and author Lynne McTaggart summarized the latest scientific discoveries related to human consciousness in her book, The Field: The Quest for the Secret Force of the Universe. Among them are these that relate to synchronicity:

When’s the last time you experienced a synchronicity?

Jean Raffa’s The Bridge to Wholeness and Dream Theatres of the Soul are at Amazon. E-book versions are also at Kobo, Barnes And Noble and Smashwords. Healing the Sacred Divide can be found at Amazon and Larson Publications, Inc. Jean’s new Nautilus Award-winning The Soul’s Twins, is at Amazon and Schiffer’s Red Feather Mind, Body, Spirit. Subscribe to her newsletter at www.jeanbenedictraffa.com.