This post is dedicated to my family and families everywhere.

Anthony Raffa Sr. emigrated from Sicily to New York in the early 1900’s in search of freedom from what he considered the oppressive reigns of the mafia and Catholic church. He was 16 years old with nine dollars in his pocket. He knew one person in America, his cousin Phil, who had emigrated to New York some years earlier. Two years later Anthony Sr. was joined by Giovanini Ianelli, a young woman cousin Phil chose for him when he made a trip back home to Sicily. The day she arrived on the boat she and Anthony met for the first time. They spent the night at cousin Phil’s home and were married in a civil ceremony the next day.

“You leave home to seek your fortune and, when you get it, you go home and share it with your family.” ~ Anita Baker

Fred’s Father, Anthony Jr., was the third of their four sons. When their mother contracted tuberculosis, the family moved to the fresh mountain air of Liberty, New York, a small town in the Catskills where Anthony Sr. supported his family as a barber. Anthony Jr. became a successful osteopath and married Julia Vera Segar, a lovely nurse of Scotch-Irish descent. They had two sons, my husband Fred, and his younger brother Rick. Some years after Julia’s unexpected death,  Anthony Jr. remarried Helen Louise Scobell, a home economics agent and artist. They moved to Tampa, Florida and had three more children, Janet, George, and Tony. Helen died many years later. Fred’s father, whom I called Dad, died at 103 with his devoted third wife, Winn, at his bedside.

“Being a family means you are a part of something very wonderful. It means you will love and be loved for the rest of your life.” ~Unknown

My parents were born in Michigan. My mother, Verna Lois Borst Meengs, was a descendant of Dutch Calvinist separatists who left the Netherlands to escape religious persecution. They founded Holland, Michigan in 1847. The ancestors of my father, Ernest Raymond Benedict, emigrated from England to Michigan. Little is known of their history. My mother and father both had one sister and one brother.  My mother became a nurse and died four days before her 94th birthday. My father, a policeman, died when I was 11 after we had moved to Tampa. Then my family consisted of only my mother, my big brother Jimmy, (James Raymond Benedict), and our parents’ relatives in Michigan. My mother corresponded with them regularly for the rest of her life between occasional reunions.

“Family faces are magic mirrors.  Looking at people who belong to us, we see the past, present, and future.” ~Gail Lumet Buckley

Fred and I attended the same high school, dated at FSU, married, and continued to live in Tallahassee where Fred earned his doctorate in economics and I taught school and completed my master’s degree in education. We have two children, Juliette Louise Raffa Lamar and Matthew Benedict Raffa, and five grandchildren. In order of birth they are Connor (who preceded the birth of his twin by one minute), Jake, Alexandra, Sophia, and Owen. The girls are the daughters of Julie and Thomas Reynolds Lamar II. The boys are the sons of Matt and Robyn Miller Raffa.

“The only rock I know that stays steady, the only institution I know that works, is the family.” ~Lee Iacocca

Fred and I are at our family home in the Smoky Mountains of North Carolina.  Last week Matt’s family came for their annual visit. My only regret was that Julie’s family was unable to join us for this year’s gathering of our immediate family in our favorite place. Here are some photos from our time together. 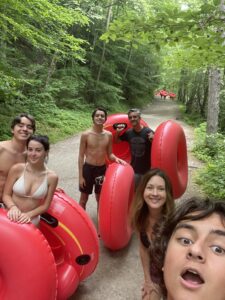 Owen took this on the way to white water rafting on the Chatuga River.

“You go through life wondering what is it all about but at the end of the day it’s all about family.” ~ Rod Stewart 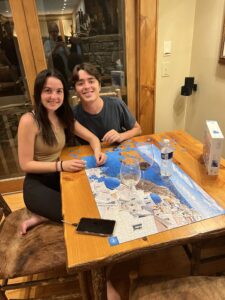 Connor and his girlfriend Heather completed a monster 1,000 piece jigsaw puzzle of Santorini that’s been sitting on this table for two years!

“The family is one of nature’s masterpieces.” ~George Santayana 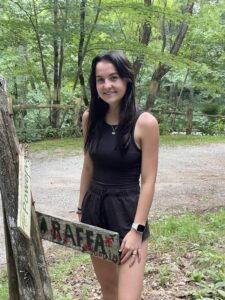 Heather repainted the faded sign on the main road next to our driveway. The other side is in her favorite color pink, with flowers.

“Being part of a family means smiling for photos.” ~Harry Morgan 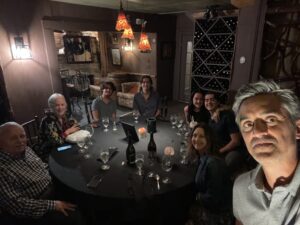 Matt’s selfie of us at Wolfgang’s, our favorite restaurant in Highlands.

“Family is not an important thing. It’s everything.”  ~Michael J. Fox 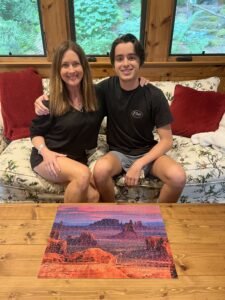 Robyn and Jake completed a puzzle of the Grand Canyon that we’ve struggled with for a year.

“Our most basic instinct is not for survival but for family.” ~ Paul Pearsall 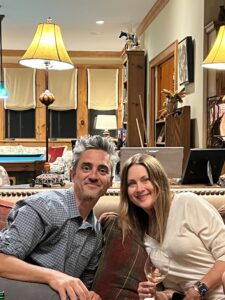 Matt and Robyn after celebrating their 22nd wedding anniversary with a special dinner out.

“What can you do to promote world peace?  Go home and love your family.” ~ Mother Teresa 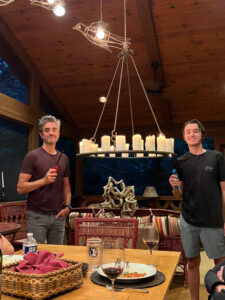 Matt and Jake lighting the candlier over the screened porch table.

“I sustain myself with the love of family.” ~Maya Angelou 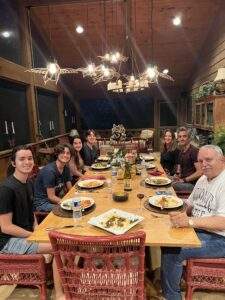 We used Grandma Raffa’s original recipes for Sicilian spaghetti sauce, bracciole, and meatballs for this dinner we made together.

“Nothing is better than going home to family and eating good food and relaxing.”  Irina Shay 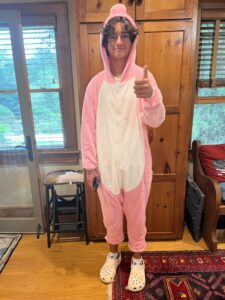 Owen decided to fly home in his borrowed pig suit.

“In our family, normal is so overrated.” ~ Gabrielle Applebury

May you receive sustenance from your family.