What Matters More: Matter or Meaning? 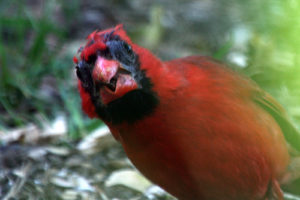 “As we hurtle toward a cold and barren cosmos…the only direction to look is inward. That is the noble direction to look. It is a direction that foregoes ready-made answers and turns to the highly personal journey of constructing our own meaning. It is a direction that leads to the very heart of creative expression and the source of our most resonant narratives. Science is a powerful, exquisite tool for grasping an external reality. But within that rubric, within that understanding, everything else is the human species contemplating itself, grasping what it needs to carry on and telling a story that reverberates into the darkness, a story carved of sound and etched into silence, a story that, at its best, stirs the soul. ~Brian Greene, Until the End of Time, pp. 325-6.

Science and psychology, outward and inward, matter and meaning, reason and imagination, are themes that stir my soul. Let me tell you a story. At 7:00 AM this morning I awoke to a tap, tap, tapping at one of our bedroom windows. I knew what it was. A cardinal, perhaps confused by the reflection it sees at certain times of day, has been intent on flying into our room since we arrived here. Sometimes it taps, sometime it flutters against the glass. Perhaps from its perspective it sees an enticing fork in a branch of a tree over yonder where it wants to build a nest. That would be the rational explanation.

But what if, from an entirely different perspective, it’s trying to get my attention? To a rational physicist, that would be a ridiculous, irrational thought. But what if this idea intrigues me? Fires up my imagination? Arouses my curiosity about dreams I’ve had that feature the color red? What if I find enormous pleasure in looking inward for a meaningful message in the symbols of red? A bird with red feathers?

Just now, at 4:00 PM, he’s outside the window again as I sit at my desk pondering tomorrow’s post. I had planned to write about the North Carolina hemlocks that are dying from an invasive insect called the wooly adelgid, and how that connects with Brian Greene’s theme of the death of the universe. Earlier today I took the photos I intended to use. But I guess I’ll have to save that for next week. I can’t drop the compelling call of this cardinal, so I’m going to see where it takes me.

My search turned up 17 dreams so far this year that feature the color red. Two mention Red Feather Mind, Body, Spirit, the publisher of my book, The Soul’s Twins. In one dream I’m looking for a red jacket. In another, a priest is found guilty of embezzling money from the church. The proof is a large red button in his possession that he snatched off a woman’s red jacket.

Three dreams feature clothes I’m wearing. In one, the owner of a clothing shop has gifted me with a white jacket and silk pants in stripes of red, gold, pink and orange, because I gave her a copy of my book. In a second, a red-haired teacher of a psycho-spiritual class has instructed me to sew something creative out of a red square of fabric and use it to teach a class on a certain topic. In a third, I’m wearing a red flowered blouse as I tour a beautiful home that’s for sale. In the backyard, surrounded by lush trees bordering a sparkling lake, I stand in awe, gazing at an exquisite glass garden room. I want a room like that. I fantasize about buying the house and using the garden room for my studies and writing.

Other dreams feature a trickle of red blood from a puncture wound on my finger, a red bruise on my hip as I look at photographs of three people I care about who have been deeply wounded by life, my sun-reddened legs, a strange creature that looks like a mix between a fox and a large rodent that has four red dots on its fur where it has been shot, two elegant women with lush red hair who befriend me (one is a therapist), a red-haired boy who needs to have his temperature taken by a nurse to see if he has Covid19, two attractive red-haired men—one who is charismatic but chauvanistic toward women, the other who is kind and gentle and wants to date me.

Each of these dreams has a plot. A few are so opaque that I can’t find any meaning in them. But in most, I felt emotions that I experienced in my outer life a day or so before I had the dream;  warm gratitude, worries about book-related projects, thoughts about a topic that fascinates me, concerns about my health, a sense of wonder.

These are helpful reminders to stay conscious of the life-giving forces in my psyche and pursue the meaning of taps on my window. I’m doing that now by tracking my cardinal muse in this post. I find it fascinating.

Will pursuing meaning prove to be as worthwhile as focusing on the material universe? Or am I wasting precious time?

Physicist Brian Greene thinks both matter, but ultimately meaning matters more. C.G. Jung, a scientist and an explorer of the universe within, believed the same. What do you think?

“Meaninglessness inhibits fullness of life and is therefore equivalent to illness. Meaning makes a great many things endurable—perhaps everything. No science will ever replace a myth, and a myth cannot be made out of any science. For it is not that “God” is a myth, but that myth is the revelation of a divine life in man.” C.G. Jung, Memories, Dreams, Reflections (1962), p. 340.

Jean Raffa’s The Bridge to Wholeness and Dream Theatres of the Soul are at Amazon. E-book versions are also at Kobo, Barnes And Noble and Smashwords. Her Wilbur Award-winning book, Healing the Sacred Divide can be found at Amazon and Larson Publications.com. Her new Nautilus Award-winning book, The Soul’s Twins, is at Schiffer’s Red Feather Mind, Body, Spirit and wherever books are sold. Subscribe to her newsletter at www.jeanbenedictraffa.com.

PrevPreviousSolstice: A Coming Together of Creativity and Hope
NextMy Assignment This Time AroundNext