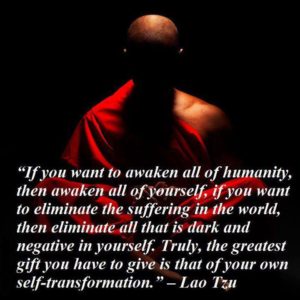 When our primitive ancestors began to reflect on the mystery of life, they may have assumed that because humanity is gendered, the gods must be as well. Earth was the foundation of existence and had an inexhaustible fruitfulness — it felt like a Mother. This experience shaped our earliest images of God. In Patterns of Comparative Religion, Mircea Eliade notes:

In some cases, the sex of this earth divinity, this universal procreatrix — does not even have to be defined. A great may earth divinities. . . are bisexual. In such cases the divinity contains all the forces of creation — and this formula of polarity, of the coexistence of opposites, was to be taken up again in the loftiest of later speculation. p. 244.

Images of a Divine Androgyne of integrated masculinity and femininity appear throughout the world. Jungian analyst Dr. June Singer says they arise from the intuition “that the Ultimate Being consists of a unity-totality potentiality.” As a religion image, the Divine Androgyne was not about human sexuality, but about the potential for life’s opposite energies to interact healthily within one unified, integrated being.

Whether the earliest religions featured Earth Mother, the Divine Androgyne or the Divine Couple, evidence suggests that reverence for the sacred Feminine dominated religious thought for many thousands of years. Then about three to five thousand years ago in an era termed the Axial Age, dramatic shifts in religious thought occurred in India, China, the Middle East, and Greece. In Greece and the Middle East, the solitary Sky Father began to usurp the Great Mother’s authority. The Supreme God was no longer a daily physical and emotional reality like Goddess, but an intellectual concept. Idealized and aloof, he lived far from us and was essentially indifferent to our daily needs.

Over time he grew increasingly uninvolved with human affairs until he became the dominant father of Judaism, Christianity and Islam. He dwells at the top of a hierarchy of males who serve him, he holds the power of life and death over us, and compared to him we are ignorant and powerless.  In fact, so inferior are we to this omniscient, judgmental male that for many of us it feels dangerous, heretical, to question him or his rules, no matter how arbitrary they may seem.

Once the Sky God captured the minds and imaginations of the patriarchal religions of the West and Middle East, Goddess became the overarching symbol for everything the patriarchs feared and rejected in themselves. She is the whore they projected onto every defenseless woman who has been stripped of her autonomy, used for their purposes, and then abandoned to fend for herself. She is the witch they tortured and torched for stirring their terror of feminine power. She is the devil who tempts us to sin, the seductress who infiltrates our fortresses and weakens our resolve, the heretic who threatens to expose the pathology of pat beliefs, the nemesis of self-righteous believers who act from the head and not the heart.

But before she was a symbol of evil, she represented something very good: creative partnership between the opposite energies of life. By demonizing her we subverted our hopes for wholeness. By integrating her we can break out of the dualistic prison that bars our growth. To acknowledge the principle of opposites is not to succumb to dualistic thinking. The world of matter will always appear dual to ordinary perception, but the limitations of good/evil thinking can be transcended with consciousness.

Insofar as they continue to elevate and idealize masculinity while disowning its destructive shadow and its complementary feminine partner, today’s religions contribute to individual dysfunctions and the dysfunctional condition of our world. Fear of incurring the Sky God’s disfavor stifles the biological compulsion to grow and change, to discover and empower our fuller selves. Our fear simply solidifies our position, and we retreat from life’s inviting warmth into cold dogma.

The ultimate spiritual realization is the oneness and unity of all creation. It is fueled by partnerships between pairs of equally valid and empowered complementary opposites. When we understand that this interaction between our soul’s twins creates and sustains life, we lose our need to value one pole while repressing the other, whether in our thoughts, words, or in the way we treat each other. We become agents for healing in everything we do.

Jean Raffa’s The Bridge to Wholeness and Dream Theatres of the Soul are at Amazon. E-book versions are also at Kobo, Barnes And Noble and Smashwords. Healing the Sacred Divide can be found at Amazon and Larson Publications.com. Watch for her new book, The Soul’s Twins, forthcoming from Schiffer Red Feather Mind Body Spirit. For more information, subscribe to her newsletter at www.jeanbenedictraffa.com.

PrevPreviousWhat Does Mature Religion Look Like?
NextThe Game of Hide and Seek:  Or How to Create a ShadowNext