Whether we know it or not, you and I are on a journey of transformation. The same is true of our species. From the moment of our conception, natural forces of growth and change we could not see or control were in operation, heating, intensifying, distilling, mixing, softening, dissolving, separating and transforming fixed aspects of our cells, minds and bodies. They still are.
Scientists devote their lives to understanding the physical aspects of these forces;  psychologists, to understanding the non-physical. Yet our knowledge of them is still rudimentary. Where does that miraculous light that shines in the eyes of every human come from?  Where does it go when our bodies die?  What is this mysterious thing we call consciousness?  Why can’t science find its location anywhere in the body, especially the brain?
Rooted in the mysteries of life and death, questions like this have always haunted humanity and inspired new directions of study including the science, or art, of alchemy. We don’t know its ancient origins but we do know alchemy was practiced in pre-Common Era China and Egypt. Mother of modern-day chemistry, Alchemy searched for the formula for the Elixir of Life and the secret to transmuting base and dense metals like lead into silver and gold.
But, as A. Cockren writes in his History of Alchemy, the accounts of the lives of those who practiced it “lead us to believe that they were concerned with things spiritual rather than with things temporal. They were inspired by a vision…of man, made perfect…freed from disease and the limitations of warring faculties both mental and physical…man made truly in the image and likeness of the One Divine Mind in its Perfection, Beauty, and Harmony.”
Early in the 20th century Carl Jung incorporated the symbolic language and images of alchemical texts into modern psychology. The base metals represented the baser parts of humanity: our unrefined instincts and raw, ungovernable emotions. The operations to purify and transform them, Calcinatio, Solutio, and Coagulatio, and the stages of change they underwent, nigredo, albedo and rubedo had their counterparts in mental and emotional processes and changes. And the longed-for results, gold and silver, were earthly versions of the heavenly perfection of the opposite energies of Sol and Luna. Finally, the holy marriage (hieros gamos) between theis King and Queen created the philosopher’s stone, a symbol of humanity’s highest accomplishment: transformation into wholeness and enlightenment. 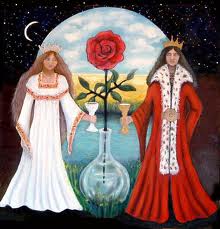 Alchemy was an attempt to understand the soul’s journey through life, and alchemists were Spirit Warriors committed to personal growth and refinement in preparation for the mystery of death and beyond. We are likewise Spirit Warriors who take our inner lives seriously enough to practice dreamwork, active imagination, astrology, tarot, I Ching, shamanism and so on. All these are symbol systems which address the language, archetypal patterns, and processes of our souls.
“Good Christian” that I was in the 1970’s, I was wary of such things.  My church considered them “occult” and dangerous. As if searching to understand ourselves and grow into our potential for relationship with the divine is the work of the devil! Yet, until very recently, this is exactly what most of the “civilized” world thought, which is why witches, alchemists, gypsies and others with inner wisdom were regularly tortured by the Church.
Whether we know it or not, you and I are on a journey of transformation. The same is true of our species. To continue to fight our natural and desirable growth is a choice to fulfill this prediction by Alvin Toffler: “The illiterate of the 21st century will not be those who cannot read and write, but those who cannot learn, unlearn, and relearn.”
My newest book, Healing the Sacred Divide, can be found at this Amazon link or www.Larsonpublications.com.

PrevPreviousReligion From the Head: A Good Christian
NextA Life Under ConstructionNext