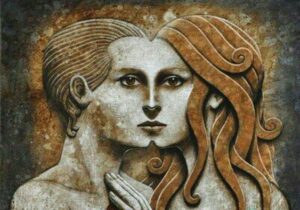 “Analytical psychology has recognized that a female element exists and is active in men’s unconscious, and a male element in women’s unconscious. A depth psychology of the feminine and of women that takes these new insights into account is necessary if we are to comprehend all the problems of relationship and of marriage; but beyond this it also makes it possible for both women an men to understand themselves more fully. ~ Erich Neumann, The Fear of the Feminine, pp. xi-xii.

That no one can be whole without accepting their feminine side and that the Sacred indwells all of us are not new ideas. But what is less commonly known is that these ideas were accepted by many early Christians.

Dr. Stephan Hoeller has examined the Dead Sea Scrolls and the lost gospels found in the Nag Hammadi Library in Egypt. In Jung and the Lost Gospels he notes that in the Gospel of Thomas Simon Peter asks Jesus to send Mary away from the disciples because he believes women unworthy. In response to Peter’s chauvinism, Jesus tells him in the only way he is capable of understanding, “…every woman that becomes male will enter the kingdom of heaven.” Jesus shows that the opposite is also true when he says, “When you make the two one, and when you make the inmost as the outermost and the outer as the inner and the above as the below, and when you make the male and female into a single unity, so that the male will not be only male and the female will not be only female…then surely you will enter the kingdom.”

Dr. Elaine Pagels, professor of religion at Princeton, has also studied the lost gospels. In Beyond Belief she describes the writings and actions of many early church leaders who, despite the assertion in the book of Genesis that we were made “in the image of God,” simply could not conceive “that God’s light shines not only in Jesus but, potentially, at least, in everyone”. For example, Irenaeus, the Christian bishop of Lyons (c. 180) vigorously warned his flock to despise “heretics” who suggest that we have inner spiritual resources. Nonetheless, what Irenaeus dismissed as heretical later became a central theme of Jewish mystical tradition — that the ‘image of God’ is hidden within each of us, secretly linking God and all humankind.

The lost gospels show that Jesus gave special teachings to those of his disciples who could understand them. One of these was Mary Magdalene who succeeded in making the “male” (masculine mode of energy) and “female” (feminine mode of energy) into a single unity, thus experiencing the Sacred Marriage  and entering the kingdom within.

In psychological language we would say that her ego died to the world’s opinion and established the proper relationship with the Sacred Self within. We can imagine how mind-blowing this inner re-centering must have been at a time when no one had any understanding of psychology. In freeing herself from narrow conventional thinking she must have been a revolutionary role model for women, a formidable proponent of the new religion, and an easy target for misogynists like Pope Gregory who, over 500 years later, labeled her a fallen, sinful woman.

In the first century Middle East the concepts of femininity being as worthy as masculinity and humanity containing divinity were incomprehensible to most people and documents promoting these ideas had to be hidden away to prevent their destruction. Thus, much of the wisdom of the early “Jesus Movement” was lost to the masses for two thousand years. Fortunately, it is being resurrected today by Spirit Warriors from every religion who honor the authority of God’s kingdom within each of us over limiting beliefs imposed by human hierarchies from without.

“Without the true masculine spirit and the true feminine love within, no inner life exists . . . . To be free is to break the stone images and allow life and love to flow.” ~ Marion Woodman, Addiction to Perfection, p. 188.