” I have been in sorrow’s kitchen and licked out all the pots. Then I have stood on the peaky mountains wrapped in rainbows, with a harp and sword in my hands.” ~Zora Neale Hurston

Have you experienced a time when several events converged to remind you of life’s joys and sorrows? This is how the last four weeks were for me.

It started on April 7 with the death of a dear friend. Que Throm was one of the most vitally alive and fully engaged people I’ve ever known. A southern belle from Plains, Georgia, she was an artist, college professor, world traveler, enthusiastic life-long learner, hostess, and benefactress of the arts. Her generous mentoring of me and my work over the years has been unlike anything I’ve experienced. When I taught at the Winter Park Jung Center she encouraged me to teach a class on the psychological meanings of the Greek Goddesses and invited several friends to join it. After the Center closed I taught a dream study group in her home for several years. When Healing the Sacred Divide was near publication, Que invited me to introduce it at a reception in her home. She and her artist husband Cicero split every year between Orlando and San Miguel de Allende, Mexico. One year she arranged for me to speak about my newest book at the annual San Miguel de Allende Writer’s Conference, again with a reception afterwards.

Cicero died a few years ago and Que was diagnosed with Stage IV pancreatic cancer last year. She chose not to have chemotherapy so she could enjoy her life and friends to the fullest in her remaining time. For most of that year she had few symptoms, none of which were debilitating. Two weeks before she died we lunched together. Afterwards she took me on a tour of the beautiful nearby campuses of the Maitland Art and History Museums where she showed me the site and plans for the new building she had endowed. On the day she died, Que got ready to go out to lunch with two friends. Shortly after they arrived she felt faint and decided to lie down for a few minutes. Less than an hour later she died in the ambulance on the way to the hospital.

I will always be grateful to this remarkable woman for modeling how to be a friend, live a full life, and die with zero drama and infinite grace. She was a rare individual who made the mosaic of her life and death into a beautiful work of art. Rest in peace with your beloved Cicero, sweet friend.

This gorgeous painting of hers brings joy every time I see it. 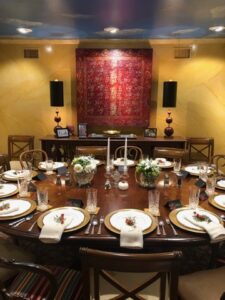 My birthday was the day after Que’s celebration of life. Fred made plans to celebrate my life that evening at a nearby restaurant with our children and grandchildren, but instead we went to the hospital to visit a close relative who’d had an accident that afternoon. I’m struck by how easy it is becoming for me to let go of my plans and flow with events as they happen.

Yesterday I received two more reminders of the ever-present realities of life and death, joy and sorrow. First, Anthea Turner’s daughter called to say that her mother had died peacefully in her sleep. At one time or another Anthea was the chairman of nearly every volunteer arts organization in Orlando, including the Orlando Ballet, the Orlando Opera, the Orlando Museum of Art, and the Friends of the Orlando Philharmonic Orchestra. In her 90’s she still attended almost every performance of the opera and the Phil. When she could no longer drive, she often rode with us. Strong, vitally engaged with life, and completely lucid to the last, this gracious lady was an inspiration to everyone who knew her. I was lucky to call her friend.

Hours after I heard about Anthea, another friend told me Nell Martin had died. Nell was a force of nature. I had never met her when she called me after reading my first book, The Bridge to Wholeness. By the time our conversation was over she had invited me to hold a weekend workshop for women at The Swag, an exquisite rustic resort in Waynesville, North Carolina. She made the arrangements, sent out invitations, and facilitated the weekend with the finesse of a professional manager/event planner. Like Anthea, she died in her sleep. To lose two dear friends in the same day was a striking synchronicity and quite a shock. Yet, the reality is that thousands of Ukrainians have had the same experience in far worse conditions over the last two months. I grieve over this terrible injustice.

“And the selfsame well from which your laughter rises was oftentimes filled with your tears. And how else can it be? The deeper that Sorrow carves into your being, the more Joy you can contain.” ~Kahlil Gibran

As a horse crazy child, horse-owner, mother, and grandmother of another horse crazy girl, I was filled with joy when I accompanied my granddaughter to the season finals of the Interscholastic Equestrian Association in Harrisburg, Pennsylvania last week. Sophia is a junior in high school. She earned her way to the finals by placing first in her class in one regional show and becoming the Reserve Champion in another. Here she is riding her horse Quinn in one of those shows. Although she didn’t place in the national finals this year, it was a wonderful learning experience and there’s always next year! 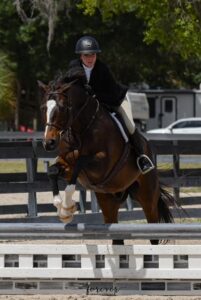 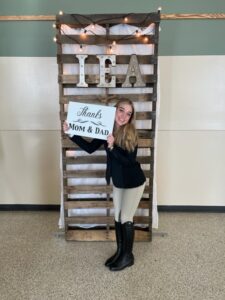 Today I feel a little less controlling and a lot more prepared for life’s joys and sorrows. What has life taught you lately?

PrevPreviousThe Evolution of God-Images Part VIII: A God of Integrated Consciousness
NextExploring the Rabbit Holes of My PsycheNext