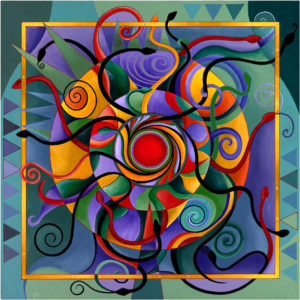 As our bodies have a mysterious imperative to grow and develop physically, so our psyche has a mysterious compulsion to evolve. We don’t know what this is, we just know it is. Carl Jung thought of the psyche’s compulsion to evolve as the archetype of Divinity. He saw it as both the core and circumference of our being. He named this archetype the Self with a capital S and defined it as our God-image. Also known in various time and cultures as the Big Self, the Sacred Self, the Higher Self, the Christ within, the Diamond Body, and so on, this evolutionary energy consists of two integrated streams: one masculine and one feminine.

The terms “masculinity” and “femininity” symbolize the principle of opposites that underlies all that is sacred to us: the miracle of life and our drives for self-preservation and species-preservation that sustain it. In Taoism the feminine principle is known as yin and the masculine as yang. In kundalini yoga they are visualized as two channels—ida (the feminine subtle channel controlling the left side of the body) and pingala (the masculine subtle channel influencing the right side of the body)—that twine separately around the spinal column and merge at seven energy centers called chakras.

When our ego begins to separate from the personal mother during Epoch II, it also separates from the united Self with its two integrated forms of energy. Having experienced a blissful Edenic Oneness during Epoch I, and feeling separated from it during Epoch II, our immature egos create an image of a distant, omnipotent heavenly deity and project onto it powers we can no longer claim for ourselves. Although many ancient cultures originally associated this deity with the the Great Mother, Creatrix and Soul of the World, later patriarchal cultures began to associate it with Spirit and the masculine drive for self-preservation. Their God-Image became an ideal Father/King, a supreme ruler who is also a perfect Warrior, Sage/Magician, and Lover. Our current tendency to see God this way originates in the masculine archetypes of the Self and personifies our Animus.

At the same time, associating the feminine powers of the Self with our personal mother from whom we wish to separate, the growing ego tends to disown many of her “superhuman” aspects. But the Sacred Feminine lives on in the feminine archetypes which comprise our Anima: Mother, Queen, Mediatrix, and Beloved. All these are maternal, transformational, and relationship-oriented and all help us connect us with the sacredness of our souls.

It takes us a long time to understand this. Both reason and intuition tell a maturing ego that whatever God might actually be, God surely does not view the universe through the eyes of human ego-consciousness. God is not familiar and safe like our opinions, bodies, families, neighborhoods, religions, nations, and ethnic groups. God is not just on our side, loving only who and what we love, fearing and hating who and what we fear and hate.

This makes sense to most of us. What doesn’t make sense is that God is also in us. Most people pull back in alarm when first introduced to this idea. What? Are you trying to tell me that I’m God? Or equal to God? But that’s heresy! Hubris! The worst kind of arrogance! This is the shocked reaction I got from a minister who came to me for help with a big dream. It’s the natural response of an anxious Epoch II ego that is afraid of being swallowed up by the feminine unconscious and has no internal connection to the Self.

To the average Epoch II ego the drives for self-preservation and species-preservation often seem incompatible. We want to complete ourselves by experiencing the love and joy of ecstatic union with otherness, but we don’t want to give up control. Since we secretly want to be in charge, and because we’re bound to dualistic thinking, the only way we know to reconcile the two drives is to see God as Outer Other: an invisible heavenly deity with whom we can never possibly become intimate because of our secret unworthiness. We cling to this idea like a life-preserver or else we scorn traditional God-images altogether because they seem primitive and superstitious to our modern scientific minds.

The heartbreaking reality for a well-meaning seeker is that our ego’s unwillingness to open to inner otherness is ultimately a rejection of the Great Mystery. It is our resistance to knowing our fuller selves that sabotages our desire for a deeply meaningful spiritual life. But psychological openness does not subject us to the influence of a supernatural devil as many fear. It simply shows us our own capacity for evil. To acknowledge that truth creates a welcoming space for the rejected feminine otherness of our soul. The inevitable outcome is an integrated God-image which we no longer experience as Outer Other but as Inner Beloved: the sacred core and circumference of our beings and our connection to the universal One Being.

What has made it difficult for you to think of God as a living force within you? Have you ever had a personal experience of that force that opened you to an expanded God-image? If so, how did that experience change your thinking about God?

Read more about your spiritual journey in Healing the Sacred Divide. This copyrighted material is from pp. 61-69.