In last week’s post I shared two animus dreams from four years ago featuring helpful men. One made me feel loved, protected and deeply secure. The other was my partner in a creative, spontaneous dance performance that was fun, but unfinished. Hooray, I thought then. My animus and I are finally getting our act together!  Surely it won’t be long before I feel some closure on our relationship.

Four years later this relationship is still far from predictable, let alone finished, as the following dreams from a week ago illustrate.

#4630.  “I Want to Stop Driving the Bus.” I’m driving a yellow school bus down the road near my house when the light turns red.  I struggle to stop before hitting the black car in front of me. The bus finally stops inches away from the car. Why am I driving this bus? Stopping it is hard. Where am I going? Why isn’t Fred here to help me? I decide to abandon it in the parking lot of a nearby grocery store and walk home.

#4631.  “My Beautiful Green Shoes Need Work.“ I’m trying on a pair of green beaded shoes I haven’t worn in years. They resemble the low-heeled Capezios professional dancers wear. They’re very comfortable but the heads of four nails are sticking out from the bottoms of the heels, moreso on the right [masculine] heel than the left [feminine]. They feel sturdy enough to walk on, but they need work before I can trust my footing to be secure. I hope Fred will help me hammer in the nails.

These dreams made me uncomfortable. How did they relate to my waking life?  What was I doing four years ago that had me feeling so good about my animus?  What’s different now? Why isn’t he, (this time in the form of my husband who always has my back in waking life), there for me when my dream ego needs him?

I had no satisfying answers until a synchronistic occurrence this morning. Having just read last week’s post, Katalina commented:  “What an interesting evolution! What else is shifting / changing that might require the re-consideration of the relationship? In what areas of life is there a faint mistrust?…Funny that there is an audience – I have been thinking of you so much in the context of audience lately. That IASD conference coming up…[and her desire to attend my Friday night keynote lecture]…the theme of presenting to an audience – U wonder if you don’t trust him to be there for you when on stage?”

BINGO!  That’s it! Last week I was convinced there was a link between my older animus dreams and the two most recent ones, and dear Katalina intuited what it was!  My Writer/Teacher animus helps me manifest my thoughts in clear, organized, logical thinking. Four years ago this month he and I were working closely together to finalize my newest book for publication. I couldn’t believe how lucky I was to have his help and I often took a few moments off to thank him. Likewise, for the past few months I’ve been driving hard, preparing to address an audience of dreamers who want to learn what I know, and he’s been invaluable in helping me write my speech and create my powerpoint presentation.

Now that we’re finished with this phase of the journey, my animus has stepped out of the picture and my old nemesis, Self-Doubt, is using his absence to undermine me. I’m ready to get off the bus. I don’t want to “drive” this project to completion without my animus. Will we take up our graceful dance on the stage at the conference? Will I be wearing my repaired dancing shoes? Will he help me voice my standpoint to this live audience as well as he does in my writing?

The journey to self-knowledge and self-empowerment takes a lifetime. At this particular juncture I think I’ve been taking the masculine half of my soul for granted and he might be feeling a bit neglected. Now that I realize how much I need his help, I plan to lure him back with some long overdue inner work: a few active imagination dialogues and maybe a ritual or two! Like most men, he turns into a real softie with some tender, loving attention!

PrevPreviousNew Dreams About My Animus
NextInto the Heart of the FeminineNext 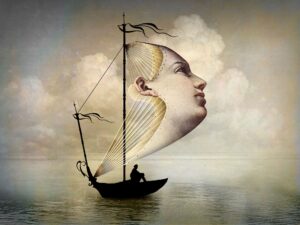